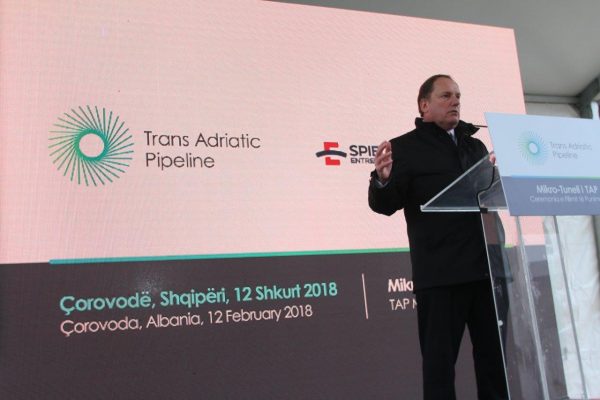 The Trans Adriatic Pipeline (TAP), organized a ceremony on Feb.12 to mark the start of works for the 1.5-kilometer micro-tunnel, which will connect the east and the west segments of the pipeline in Albania, said a message from TAP AG consortium.

Addressing the ceremony, Albania’s Deputy Minister of Infrastructure and Energy Enis Aliko stressed the importance of the TAP project for the Albanian economy.

“It is the first time that this kind of operations and techniques are executed in Albania, part of an important project such as TAP. Moreover, I would like to congratulate TAP on the safety standards applied during the construction of the pipeline,” said Aliko.

TAP Project Manager for Albania, Karl Roberts, stated for his part that the micro-tunnel will be constructed using state-of-the-art technology with minimal human intervention, making it the safest method for the environment.

TAP, worth 4.5 billion euros, is a part of the Southern Gas Corridor, which is one of the priority energy projects for the European Union. The project envisages transportation of gas from Azerbaijan’s Shah Deniz Stage 2 to the EU countries.

The pipeline will connect to the TANAP on the Turkish-Greek border, run through Greece, Albania and the Adriatic Sea, before coming ashore in Italy’s south.