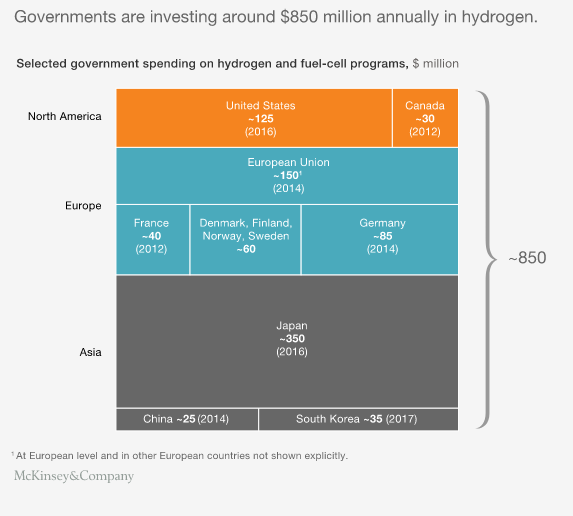 Hydrogen can — and should — play a key role in transitioning to low-carbon energy technologies. According to the Hydrogen Council, the chemical element could account for up to 20% of planned cuts in carbon emissions by 2050.

Hydrogen is a versatile energy carrier that leaves a small carbon footprint. It can, for example, enable renewable energy systems, while also assisting in decarbonizing other sectors, such as transportation or heat and power.

Among its key potential roles, the decarbonization of transportation is the most prominent. The Hydrogen Council claims that one-third third of the growth in global hydrogen demand could come from the transport sector, and that by 2050 hydrogen-powered fuel-cell vehicles could constitute up to 20% of the total vehicle fleet.

Furthermore, hydrogen technology can be used to complement batteries used to power light electric vehicles, as it can store more energy in less-heavy batteries—making it suitable for long-range vehicles with heavy payloads. These fuel-cell electric vehicles (FCEVs) emit 20% to 30% percent less CO2 than vehicles powered by internal combustion engines.

Nevertheless, adaptation to a new hydrogen market could come in waves, starting with the commercialization from passenger car vehicles to hydrogen buses or full-cell trains. A group of regions — led by California, Germany and Japan — is driving developments and investing in advanced hydrogen and fuel-cell technology. Other countries around the world have already announced they will build some 2,800 hydrogen refuelling stations by 2025. Indeed, this accounts for but a small number when compared with the number of petrol filling stations worldwide: nonetheless, the advance would be sufficient to cover the leading markets for hydrogen vehicles. Industry, investors and policy makers would do well to step up their efforts to accelerate current momentum.