The role of energy policies in economic growth and power, by Tirana Times, AIIS, 27 October 2017 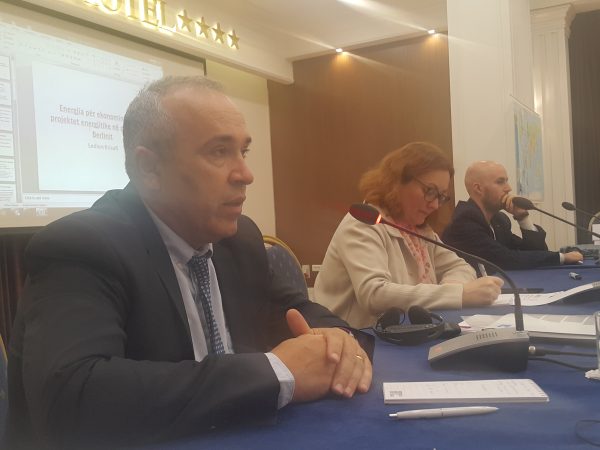 TIRANA, Oct. 25 – Through a well-established tradition of cooperation, the Albanian Institute for International Studies (AIIS), in cooperation with the Friedrich Ebert Stiftung (FES), organized a conference on energy projects and policies as factors of economic growth and power. Particular stress was put in enabling connectivity among the countries of the Western Balkans and their inclusion in the EU’s common energy market.

During the conference, the latest energy developments and power dynamics rising as a result of energetic novelties and discoveries were discussed, as well as the role of energy in economical development and the energy projects in the context of the Berlin process in South-East Europe.

The opening remarks were jointly held by AIIS Director, Dr. Albert Rakipi and FES Director, Prof. Dr. Wulf Lapins. Dr. Rakipi described the excessive amount of money being spent on energy bills every day, mounting to 1 billion Euros, and the fact that many countries of the EU are dependent on energy resources from one country only: Russia. The increasingly unstable global political situation and frequent disagreements arising among countries, might lead to a European/global energy crisis, Dr. Rakipi said, a possibility which makes Albania’s initiative of an energy project a strategic investment of great importance for the country and for the region alike.

Dr. Lapins, on the other hand, talked of geopolitics and geo-economics in an introductory way, for all present participants who were unfamiliar with the concepts. “Geopolitics,” Dr. Lapins said, “is the political inquiry of the earth, whereas geo-economics was born from the continuous chance of economics and politics. Borders are increasingly losing their power, and even though territorial conflicts still exist, wars are kept at bay. In this context, geopolitics has turned to geo-economics, as the latter focuses on competition, not the ‘friend-enemy’ concept of geopolitics.” Dr. Lapins explained how energy policies allow countries to compete and economically ‘threaten’ other powerful countries, such as Qatar is now threatening Saudi Arabia with its high export of liquid gas, a potent energy source.

Invited at the conference as international specialists of the energy field were Dr. Frank Radke, publisher and Editor in Chief of Energlobe, and Matthias Dornfeldt, Assistant Professor of energy policies and diplomacies; Dr. Gjergji Simaku, Director of Renewable Energy Sources and Energetic Efficiency and Dr. Ledion Krisafi, researcher of AIIS, were invited to speak from a more local and regional perspective.

Dr. Radke spoke at length of the importance energy sources have in our lives and in the power of nations, quoting Churchill, who having understood the importance of diesel to the British navy, was the first to say that “he who has the oil, will rule over the world.” Today, Radke said, it is much more difficult for Europe to build the bridge between foreign policy and energy policy due to conflicts between old, powerful oil-producing countries and new ones. The USA, he noted, has come to possess great power in the context of energy production.

Among the most important points of his speech were the new alliances and frictions created in the shifting energy power dynamics – the increasing power the USA and China are gaining and the possibility of replacing Saudi Arabia and Turkey in the powerful energetic trio that is now made up by Turkey, Russia and Saudi Arabia. Dr. Radke also spoke of the time of great insecurity we now live in, and the ways this calls of a new world order, new institutions and new approaches in many of the existing notions – “the biggest risk for global economy is geopolitics,” Dr. Radke said, “and it should be included in the geo-economic report.”

In the context of a stagnated globalization and economic development – the result of the 2008 economic crisis, which is still continuing – experts believe that the following 10 years won’t see increase in productivity, only in regulatory measures and policies that will aim at protecting the environment, keeping production levels stable and maintain diplomatic relations between world powers. Dr. Radke also put emphasis on the USA’s revolutionary SHELL technologies in obtaining energetic power, the easiness and effectiveness nano-robotics have brought and the shift in US energy policy. “The aim of the USA was always to be energy-independent in its essence,” Dr. Radke said, “until Trump declared the US wants energetic dominance, meaning it will seek its own interests, using energetic power and competence.”

Dornfeldt, on the other hand, spoke of the security assurance and stability energy policies provide, as many agreements between states have been achieved through energy plans and investments. He noted how relationships between Russia and Germany, despite historical disagreements, have been established based on trade ties, on the agreement that Germany will be provided Russian gas, as long as it provides Russia the equipment. As such, he went on to explain, many future investments and agreements that will lead to economic prosperity and security can be made possible.

It is in this context that the Berlin process is so relevant. Dr. Krisafi spoke of the Russian domination in the Western Balkans, as the biggest seller of gas and oil. An exception to the rule here are Albania, Kosovo and Montenegro, whose inexistent gas infrastructure has kept them out of Russia’s radar. Dr. Krisafi explained the importance of the energetic projects of the Western Balkans in two prisms: to develop the country and the region alike, and to minimize Russian influence in the region and the EU. Indeed, the TAP project has helped Albanian economy, as it brought 33% of foreign investments in 2016 alone, whereas 1 billion Euros more are expected to be invested in the following 20 years in roads, bridges, infrastructure, etc, aiming at a regional cooperation that would effectively surpass all political and historical disagreements.

Sinaku, who effectively held the closing remarks of the conference, also stressed the importance of connectivity among the countries of the West Balkans, in order to enable the transmission of good, knowledge, and necessary technologies.

“Renewable energy sources are a safe future investment,” Sinaku said, “which is why we first need to focus on taking soft measures and following European practices, being energy efficient and following rules in building, constructing and wasting energy.”

The conference was concluded among conversation concerning the role of individual actors in the grand scheme of energy relations, the transmission of technologies and knowledge from developed to developing countries, the role and possible consequences of Russia’s influence in the region and the economic benefits and drawbacks essential actors such as Germany gain and suffer when investing in energy projects in regions such as the Western Balkans.