What China’s “Belt and Road Initiative” means for the Western Balkans, by Vanora Bennett / EBRD, 11 September 2017 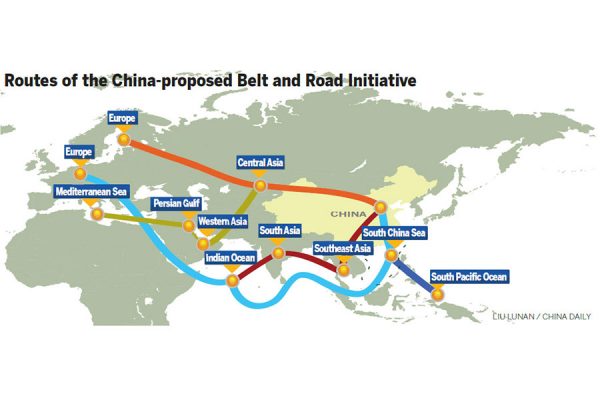 Romania is one of the countries that will benefit from the “Belt and Road Initiative”.

China’s “Belt and Road Initiative”, launched by President Xi Jinping in 2013, is a Eurasian grand strategy that seeks to expand and secure maritime routes and land infrastructure networks from China connecting Asia, Africa and Europe.

Also known as ‘One Belt, One Road’, it presents a range of opportunities as well as challenges for the countries involved. The blueprint includes a mosaic of trade deals, energy cooperation and financing agreements taking China westwards. The aim is to establish China’s political economy on a global scale.

Seen from a European perspective, Chinese forms of soft power are already on display along what has come to be known as the Balkan Silk Road, a Belt and Road Initiative route running from Beijing to Athens and connecting with Belgrade, Sarajevo, Skopje, Budapest, Tirana and other capitals.

This south-east European region has been at the heart of the EBRD’s activities for the past quarter-century. The EBRD is already engaging with Chinese companies and authorities along the Balkan Silk Road, as tenders now being awarded focus minds on the need to carefully weigh up the opportunities and challenges brought by the emergence of a major new player in the region.

As part of this process, the EBRD has commissioned an independent report on the development of the Balkan Silk Road.

Written by Jens Bastian, former chief economist of the European Agency for Reconstruction and member of the EU Task Force for Greece, and funded from the Central European Initiative, the report will be launched on Thursday, 14 September at the Office of the European Parliament in Athens in an event organised by the Hellenic Foundation for European and Foreign Policy (ELIAMEP).

There are many benefits to a geopolitical development which has been broadly welcomed by global bodies and countries in the region alike.

Equally, through the acquisition of ports, opening of bank branches in the region or official lending for bridge building, highway construction and power plant renovation, an infrastructure of transport and logistics networks is being created.

The availability of below-market loans to finance new infrastructure capacity is welcomed by many countries that are not prime investment destinations or face limitations in private-sector lending. But, Dr Bastian adds, it also raises concerns among critics who question emerging levels of debt dependency on Chinese providers.

Also on the minus side, Dr Bastian draws attention to some European businesses’ concerns about China’s business transparency. As he points out, this was identified as a problem at the high-profile “Belt and Road Forum” in Beijing in May 2017, when various EU member states declined to sign a proposed trade statement which Beijing had drafted.

The objections voiced cited a perceived lack of transparency references, together with open, rules-based public tenders and reciprocal market access. The European attention to fair and transparent procurement practices is a reflection of concerns that Chinese companies could benefit from future Silk Road contracts while sidestepping standards in tendering contracts to which European partners adhere.

This is where institutional anchors such as the EBRD, EU, IMF and other international organisations  come in, according to Dr Bastian. He recommends the EBRD adopts a pro-active approach to ensure standards are maintained and the maximum benefit can be drawn from China’s ambitious project.

Seen from the Chinese perspective, the penetration of south-east European markets and sectors brings this periphery into a more centrally positioned part of the integrated Eurasian economic zone that Beijing envisions. Dr Bastian’s report is, however, reassuring on worries sometimes voiced that the Chinese initiative will give Beijing excessive influence.

However welcome Chinese investment, he emphasises that the region, with its strong interest in EU and NATO membership, remains firmly anchored in Europe.

Mixing and sharing the regional know-how of the EBRD with the financial resources and investment determination of Chinese companies can be a “win-win” combination for both parties, Dr Bastian concludes, as the Belt and Road Initiative has the potential to help in transforming the Western Balkans.