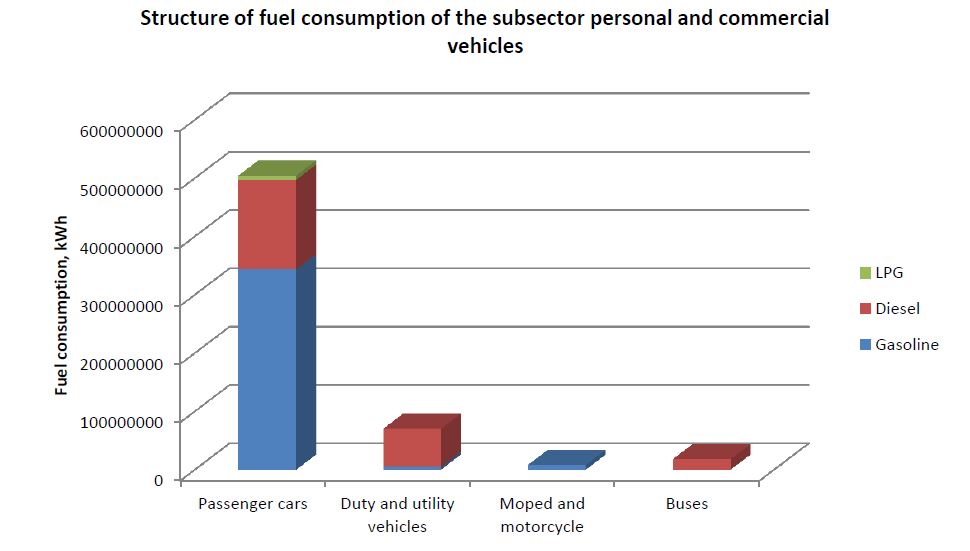 City of Tirana has experienced a rapid urbanization and population growth in the last two decades. Tirana’s population has grown from 250,000 in 1990 to 620,000 in 2011 within the administrative area of the Municipality of Tirana (MoT). For the year 2025 the metropolitan area of Tirana (including the communes on the periphery) are estimated to amount to 1 million or more inhabitants. The extreme population growth has directly influenced the annual energy consumption of the city.

Referring to the SEAP study and taking into account both scenarios (BAU scenario and scenario with measures) the results of the energy consumption and CO2 emission for the year 2020 indicate a small increase of 1.5% for the public sector comparing to the private sector.

Based on the above figures it is clearly visible that the implementation of all the measures regarding the reduction of energy consumption and CO2 emission within the public sector will not have significant impact compared with the actual values of 2011. The Municipality’s objective therefore must be focused on measures for reducing the energy consumption and CO2 emission within the private sector, especially the consumption from residential buildings.

Impact of Existing Building Stock on the Energy Performance

The number of existing building stock in the metropolitan area of Tirana is very high. Even though in the last years the Municipality of Tirana has tried to prevent the urban growth by reducing the building construction permits the communes in the suburban areas of Tirana developed rapidly and have created a big residential building stock. This uncontrolled urban development has affected the total amount of energy consumption, especially since during the peak construction time from 1998 to 2008 no energy efficiency measures were implemented or integrated in the process. In order to address this building stock and additional to making energy efficiency regulations new buildings the MoT should also especially focus on measures/requirements regarding energy consumption improving the quality of the existing building stock.

Furthermore, other risks that may lead to unreliable and unrealistic result of these foreseen actions should be considered. The urban development is in continuous transformation and it’s important to consider the fact that it’s hard to keep it under control. In the New General Urban Plan approved in 2012 by the MoT, is a total increase of 10% of new building stock is forecast these new buildings shall be built based on new regulation containing energy efficiency standards enhancing and reducing the total energy consumption.

Dependency on Energy Policies & Legislation outside of Local Government Authority

The here period is the right time for the MoT initiate the required measures and legal requirements as far as it is possible and allowed for the authority of the local government in Albania. A new law on “Energy Efficiency” is putted in place by the National Government (Ministry of Energy & Industry) from the end of the last year. Therefore, the MoT has not more a restricted legal framework to operate on and has open the way to adapt its strategies or measures to national policies and legal requirement as soon as made official.

Another important fact to be considered is the policy of the national government in regards of the energy price (cost per consumed KWh). In case the National Government decides to introduce a reduction of the electricity price the incentive of the private/residential sector to invest into energy efficiency measures will be automatically lowered immensely. As the local government has very little legal or executive power of controlling the existing building stock sector the measures or possible incentives foreseen might have no effect.

Notwithstanding the above the positive result of the SEAP and the monitoring of measures regarding energy consumption it does not highly depending on the policies decided on the national government level.

Impact of the Deficiencies of the Existing Infrastructure Network

Lastly, the existing electrical network/infrastructure is very amortized and insufficient. Stronger control and measures have to be taken against abuse or illegal intervention into the public network in the future. Then some date raised in SEAP of Tirana report might be therefore not very representative and would need to be adjusted over time in line with the enhanced management and control of the system.