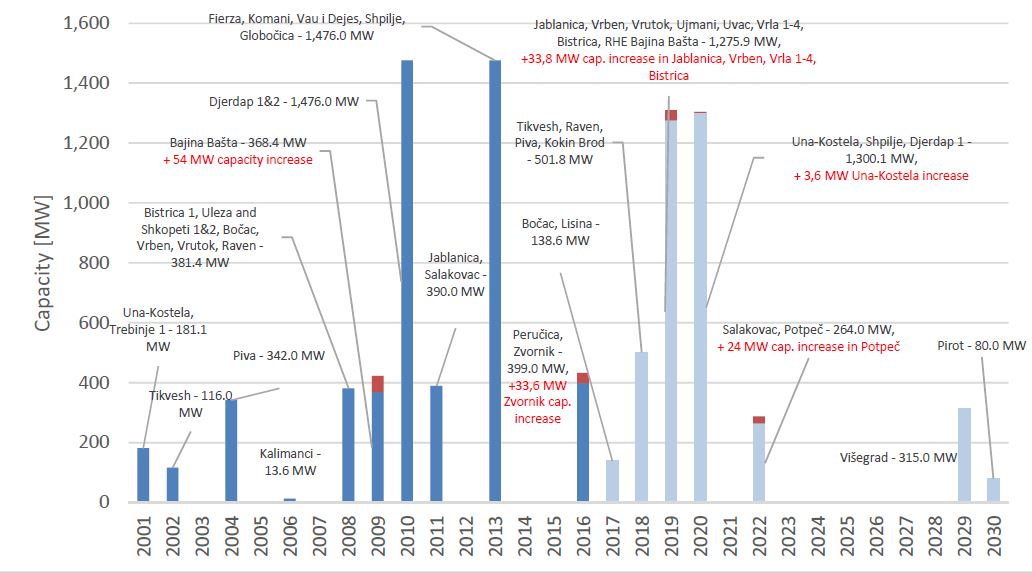 The majority of installed capacity in the region was put online in the sixties and in the seventies of the previous century. An industry standard is that approximately 40-50 years is considered an appropriate operational lifetime before major rehabilitation of HPPs is required. In the context of the WB6, this shows that at least 4,500 MWs of HPPs are now getting into, or already are in, the age for rehabilitation.

A brief analysis of capacity and generation increase in rehabilitation performed on projects for which sufficient data are available concluded that the average increase in capacity is approx. 4% and in generation due to refurbishment is relatively modest at 5-6%. Those averages also include the addition of new unit at HPP Potpeč, which is technically not a rehabilitation, but the addition of a new unit.

Unit investment, expressed in Euro per added MWh of generation is on average 1,137 €/MWh (however varying widely from case to case, depending on the scope of the rehabilitation). Compared to the data on average investment cost per new GWh from greenfield projects of about 700-800 €/MWh, it can be clearly state that energy from generation increases from rehabilitations is generally more expensive than energy from new greenfield projects.

Taking into account either the stated plans of the plant operators or the required rehabilitations due to a nominal 40-year expected service lifetime, in the next 5-year period (2017-2022), a total of 3,962 MW of HPPs are due for rehabilitation works of varying scopes. Summarized investment cost of rehabilitation projects with available data is over 600 mln €. It is obvious this will represent an enormous task and financial burden for the operators / owners of these HPPs.

On the other side, this refurbishment backlog represents a considerable portfolio of investment projects with high probability of implementation, and as such, these represent an opportunity for strengthened cooperation with IFIs that traditionally support such measures. However, this is also an indication that the current operators are likely to be unable to act as investors in greenfield HPPs in the forthcoming decades during which time they are expected to have significant debt repayment obligations in respect of the refurbishment activities which will naturally be their topmost priority.