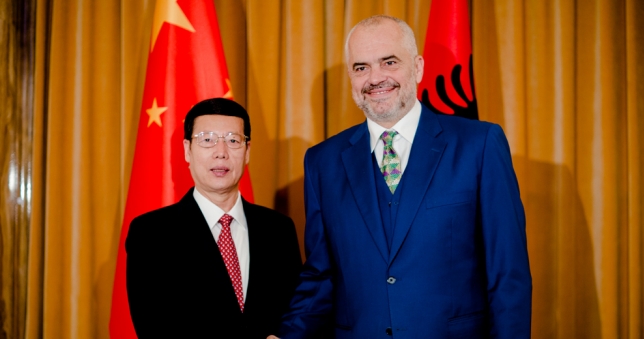 Albania and China have excellent inter-state relations. This positive climate will become a generator for boosting further the economic cooperation and Chinese investments in Albania.

China’s Deputy Prime Minister congratulated on the work done in these years and on the reforms undertaken. The Chinese side emphasized that Albania’s position in the region is strategic, and they consider that the increase of pragmatic cooperation projects is necessary to promote private investments.

Currently, China has several cooperation initiatives in the region where Albania is part, such as CEEC 16 + 1 or the “One Generation, One Way” platform. The scope of economic cooperation between the two countries can be expanded even within these initiatives.

In addition to highlighting the fact that currently China has the biggest investments in Albania, Prime Minister Rama noted that these investments are expected to be a benchmark for welcoming other investments.

The parties agreed that the work of the Economic and Commercial Committee should be intensified, as an initiative of the two countries to explore the potentials and opportunities for cooperation. It was also agreed at this meeting that the line ministers exchange the list of strategic projects in Albania in order to identify the areas where cooperation could be expanded. The Minister of Economy was appointed as chairman of the Economic and Trade Cooperation Committee between the two countries. The work of the Committee will be assisted by the Office of the Prime Minister, together with the China Ambassador in Tirana.

The parties decided in principle to hold another meeting in China in two months in order to see the progress of the Committee with concrete projects for cooperation between the two countries.