SHELL, another major investment in the oil sector in Albania 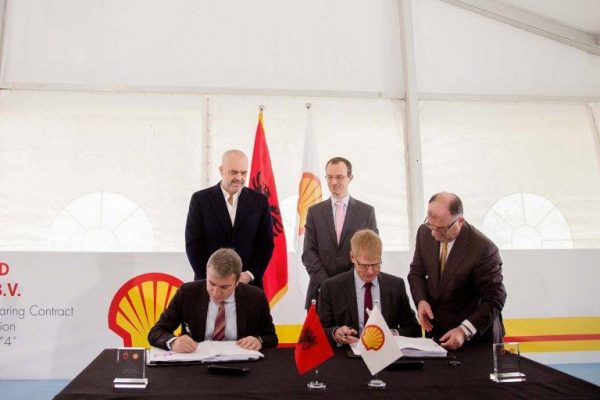 Remarks by Prime Minister Edi Rama at the signing ceremony of SHELL hydrocarbon Agreement in Block 4, in Shpirag, Berat:

The legend says that the 23 reddish-brown slopes of mount Shpirag are due to a battle two brothers did, namely Shpirag and Tomorr over a girl they both loved, Osume. Tomorr drew his sword and cut Shpirag to pieces. This area is renowned for its cultural heritage and ample nature richness over the centuries, most of which similar to the mountain legend, lay sleeping. Such is the overwhelming oil supply believed to be buried in Shpirag’s underground, a reserve that can transform the future for good, not of this region only but Albania as a whole. Therefore, today is a remarkable day on the path towards future.

SHELL company agreement materializes a 20 years old interest since SHELL first came to our country back in 1994, to then withdraw due to the turmoil that followed three years later. SHELL company return, whose annual revenues are 30 times larger than the Republic of Albania’s Gross Domestic Product, shows clearly that we are righteously delighted and hopeful to the future of the oil and gas sector in our country.

Just like the friends themselves – as we have become friends, during a very long negotiation process of more than two years with SHELL company – have announced, while they have completely interrupted their exploration programs, due to the drastic downturn of oil price on the world stock market exchanges, they did not only limit themselves to the purchase of the “Petromanas” company but were presented with the request to sign the first direct contract between them and the government of Albania.

I would like to thank them today because in the long negotiations process they have accepted a significant amendment to the Albanian government’s approach in these agreements. Besides this aspect, they have also undertaken to provide considerable investments to improve the community’s life in this area. SHELL’s social investment plan envisions investments on vocational education, road safety, primary health care service and support for the development of small businesses in the area. SHELL  is not doing this from any missionary love for Albania, but as part of its development vision and encouraged by recent exploration data and indicators for a new oil reserve, which is undoubtedly the largest revealed to date in Albania and we look forward to learning how commercialized it will be, hopefully, by the end of this year.

This Agreement is pivotal to Albanian government because it also conveys to the public an expression of our determination to alter our approach to the relationships with companies that utilize our natural resources and it is different from the time when the state budget benefited only the mining rent from them. We have already accorded an agreement that is a clear and long-term guarantee for mutual benefit, definitely in the company’s interest, but also in the interest of the Albanian people.

The agreement is the outcome of a mutual interest process and on the other side, of a mutual persistence to achieve a process which guarantees not merely shared benefits but also provides hundreds of job positions to be generated in the first years, while the utter project is estimated to highly impact Albanian economy.

By signing this new Agreement in Block 4, we are opening way to a new and substantial foreign investment in our country and we hope that, as this Agreement increases the presence of the Netherlands as a country where a large amount of foreign investment comes from, it will be worthwhile that in the Netherlands Albania is seen as a whole, just as it is and not partial, as though there is nothing here but organized crime.

Actually, as our SHELL friends can testify, Albania today guarantees clarity, transparency and fairness in the relations between government and foreign investors related to the non-distant past. On the other hand, the presence of a company like SHELL constitutes another reason for other companies to see Albania, not as described in various media in Europe or as exponents of various political forces who oppose enlargement of the European Union like to, but as a country where anyone can invest since SHELL is investing.

If SHELL finds a business-friendly atmosphere, anyone else could as well. Since Albania has not been part of SHELL strategy forced by stock market prices fall to stop its exploration programs, but instead continues it, anyone else can see Albania alike, as a country of ample opportunities, including the oil sector itself, where, as the Minister has underlined, there is still much to explore and there is still much to discover after this very important discovery, which we look forward to proving its commercialization.

I would not want to linger longer with our efforts to bring the whole sector to the forefront of sustainable development, within the sector’s contemporary legal framework that is already established, with the work done to set up a special infrastructure for the sector development and with the challenges still ahead and which have even recently emerged, either in the form of a serious concern, such as the normal running of ARMO company, or the necessity to reform “Albpetrol” and even in terms of a vital need to guarantee the balance between all this effort for environmental development and sustainability.

Ultimately, I want to bring to everyone’s attention and I am not aware if this information comes new to our SHELL friends present, that this is the 100th anniversary of the first oil reserves discovery in Albania through drilling a well in the Drashovica area by Italian specialists and oil workers in 1918. The history of trying to discover oil is 100 years old, but, undoubtedly, this extraordinary wealth has not yet had the needed impact which could have had, should have and must have in the lives of our people.

Our major aim is to open way to this impact. Therefore, it makes the substance of the Agreement we signed today with SHELL, which marks the first agreement on the path to a new approach, where Albanians are no longer audiences who live or benefit merely a mining rent but are co-beneficiaries of exploration processes.

It took 100 years to the prophecy of “Le Petit Parisien” newspaper to fulfil, which in 1925 wrote: “The great, be these Americans, English, French or others will come to Albania, to become partners of a long-term development of that poor country” based precisely on our natural resources and oil in particular.

We have the British and the Dutch nowadays, the best we could find, as if we had a common team that of Ajax Amsterdam and that of today’s Manchester City which would be absolutely invincible in all Champion League confrontations.

Thank you very much for your presence and let us wish together that the end of the year will provide us the much endorsed outcomes. What Shpiragu has held hidden for so many centuries will become the tangible asset of the Albanian people and unquestionably there is also no reason for you to not have an even greater balance sheet than the present’s, hopeful that, however, your profit will not be 30 times higher than our Gross Domestic Product, but also thanks to you, we will narrow this ratio.

SHELL Company launches oil exploration in Block 4 in Shpirag, Berat, and continues the oil exploration program, based on the high expectations emerged from the current research in Blocks 2 and 3. The Albanian government signed a hydrocarbon agreement with SHELL today, which increases the Netherlands presence via foreign investments even more in our territory. Under the Agreement, the company also forecasts social investments to improve the community’s life in this area, on vocational education, road safety, healthcare services and development of small local businesses.

Source PM Albania: SHELL, another major investment in the oil sector in Albania