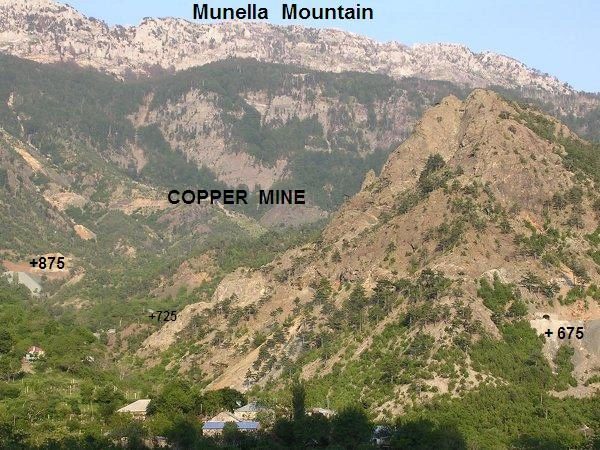 The copper industry is one of the oldest industries in the country. It has operated as complex ranging from geological research, mineral extraction, enrichment, blister copper production, electrolytic, wires and cables, brass and other copper alloys, brass lamination up to slag processing. Its origin starts from 1936, with geological research carried out by Italians and later on with the start of mineral production in Rubik mine which was accompanied with the construction of enrichment factory and melting plant. After the WWII, with mining and Rubik plantbase this industry was reactivated in 1946. Production rates increased from year to year and in 1960, 72200 tons of mineral and 950 tons of blister copper which was exported, was produced.

After this period the copper industry development was done in two directions, intensive and extensive, where priority was given to the second one. Hence, many mines were put in use, 7 enrichment factories were built, 3 copper plants and wires and cables plant in Shkodra. With these investments, it was completely closed the cycle of full copper mining processing (from the extraction to the production of wires and cables covering the country’s needs and demand for export).

After 1985, priority was given to the intensive use of the copper industry. The highest levels of production were achieved in 1989, where 1.14 million tons of copper mineral, 62,000 tons of copper concentrate, pyrite concentrate, and 15,300 tons of blister copper were produced. After 1990s, with the change of the system, and with the corporate- level copper scheme (Albbakër), based on the economic assistance given by the government and European Community, it began the stabilization of the part of the industry which had remained undamaged or that could get back to work without large expenses which was evaluated as economic for use.

In the years 1995-1997, this industry was reactivated in 13 enterprises with 4,500 employees, 15 mines were put into function and were organized in 7 mining enterprises, 7 enrichment factories, and 3 copper and wires plants.

Dealing with the market economy necessitated the economic reassessment of this industry for almost every source, so some mining sites, enrichment factories and copper plant in Kukës were closed and conserved, because its operation and function heavily burdened the economic situation of this branch. After the events of 1997, this industry was completely suspended.

Despite some attempts to reactivate it, the sharp drop in the copper metal price in the world market, the huge stock of reserves, the lack of investment and other objective and subjective factors, made all this efforts fail. Eventually, by Government decision, based on economic-financial analysis, a number of objects of this industry were closed down, preserved and later on demolished. In 2001, a concession was granted for some of the main facilities of this industry, and therefore in 2004 and on it was restarted its activation but only until the enrichment.