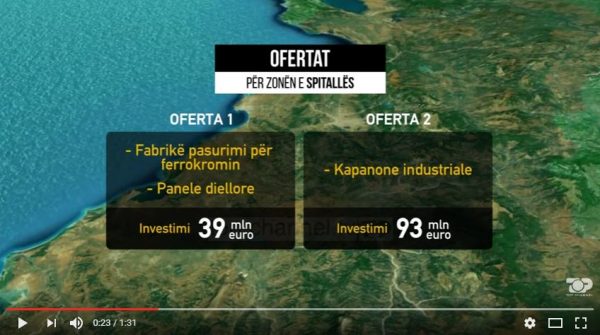 The Ministry of Economic Development, Trade and Entrepreneurship has announced the winner of the bid for the construction, development and maintenance of the free economic zone in Spitallë, Durres.

A press release, published on the website of the Public Procurement Agency, announces that the winner is the temporary merger of three operators: Pelikan, The Best Construction and Vellezerit Hysa.

Their bid was rated at 71.2 points, leaving behind Edil-Al-IT’s bid, which achieved 70.6 points.

According to the presented project, the merger of operators foresees the construction of a plant for ferrochromium enrichment, while the value of the offer is about 39 million euros.

The area that is expected to be constructed and developed is 101.22 hectares, for a period of 99 years.

Meanwhile, according to the announcement of the PPA, the consortium of operators will have to submit to the Ministry of Economic Development the contract according to the form required in the Standard Contracts Procedure, as well as the bank document certifying the payment made for the publishing expenses and specialized consultancy expenses.

The announcement of the winner’s ranking of this bidder was initially made on July 5, but it was rejected by the second bidder.

This was also the reason why the company EDIL AL-IT filed a complaint with the Public Procurement Commission but through a letter, dated 17.07.2017 the operator was informed that the complaint was not accepted.

Spitalla was declared a free economic zone in May this year, when Economy Minister Milva Ikonomi suggested that two bids for its development were being considered.

According to the head of the economy ministry, the biggest benefit from the area is productivity growth.