The politics of biodiversity and hydropower on ‘Europe’s last wild river’, freshwaterblog, July 11, 2017 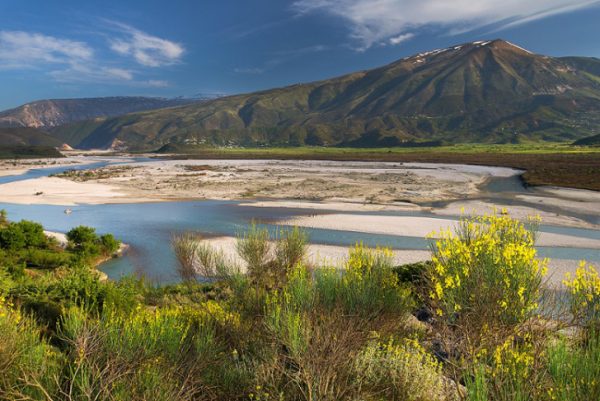 After 20 years of postponement, an unfinished hydropower construction on the Vjosa River in Albania was cancelled earlier this year. The Vjosa is Europe’s last ‘wild’ large river, flowing entirely unobstructed through inaccessible gorges and enormous gravel banks and islands on a course of almost 270 kilometers from the Pindus Mountains to the Adriatic Sea. However, the river system is currently the subject of a number of hydropower constructions, which potentially threaten its rich – but little researched – biodiversity.

The cancellation of the Kalivaç project in May was seen as positive news by environmental NGOs such as the Austrian-based RiverWatch who have long campaigned against hydropower developments on the Vjosa. However, shortly afterwards, the Albanian Ministry of Energy and Industry opened procedures for construction companies to tender for renewed hydropower construction at the site before 18th July.

“The cancellation of the existing contract – which makes the Vjosa legally free from any hydropower plans – offers a real chance to declare the Vjosa to the first Wild River National Park in Europe. Nonetheless, the government has decided to re-open the concession procedure, against the will of local authorities and communities, national and international stakeholders. We will vigorously fight against this project and for a dam-free Vjosa”, says Olsi Nika from EcoAlbania, coordinator of the Vjosa campaign in Albania.

The Kalivaç hydropower project was accepted in 1997. Construction of the 45 metre high dam began in 2007, but was only a third completed before the project was cancelled, leaving the river flows largely unimpaired. Environmental scientists and campaigners fear that renewed hydropower construction will threaten poorly documented aquatic biodiversity in the Vjosa.

Proposals for another major hydropower construction on the Vjosa, downstream of the Kalivaç site at Poçem were overturned by judges at the Albanian Administrative Court in Tirana in late May. One of the key reasons that the Poçem construction was overruled was due to an insufficient Environmental Impact Assessment on the effects of the hydropower plant on the river ecosystem.

The overruling of the Poçem construction – which is likely to be challenged – was the result of a lawsuit filed in December 2016 by environmental NGOs and local residents, who claimed there had been insufficient public consultation on the impacts of hydropower.

“This decision shows the importance of fighting disputed hydropower projects on a legal level – not only in Albania but in the entire Balkan region. Many – if not most – of the 2700 projected hydropower plans in the Balkans contradict national and European legislation. We will prepare further legal actions against projects that we perceive as unlawful”, outlines EuroNatur CEO Gabriel Schwaderer, one of the key proponents of the lawsuit.

A month before the cancellations (or at least, postponement) of the Kalivaç and Poçem projects, a group of 25 aquatic scientists held a press conference in an unusual setting on the river –  a large gravel island near the village of Kutë, which would be flooded if the Poçem scheme went ahead.

The scientists reported on a week of intensive research on the Vjosa’s biodiversity and hydromorphology, about which there is currently very little information. They found that animal and plant species which have long disappeared in European rivers are still abundant at the Vjosa. In addition, they confirmed that the river transports huge quantities of sediment, which is likely to mean that any hydropower reservoirs would be clogged with deposited sediments within decades.

As a result, significant research is necessary to project – and potentially prevent – future impacts on the Vjosa’s biodiversity, water flows and flood and erosion dynamics from hydropower. Prof. Aleko Miho from the University of Tirana explains, “The Poçem project not only puts the river section at Kutë at risk, but negatively affects the entire downstream river course all the way to the mouth, including the Narta Lagoon. This has not yet been assessed at all. This week’s initiative should be seen as merely a start. In order to properly assess the actual impacts of the projected hydropower plant, a three-year research program is indispensable.”

The Vjosa is clearly a valuable river, but the type of value it offers – and how it might be used – is hotly debated. The Vjosa is a rare – if not unique – example of a largely unmodified European river system, which supports both rich biodiversity (its watershed includes populations of the rare Balkan lynx) and low-impact agriculture, livestock farming and fishing.

However, it also provides huge hydropower potential for the Albanian government to exploit. At present, hydropower is the country’s only domestic source of electricity, providing 80% of its total energy, and generating as much as 10% of its annual GDP (pdf link).

“Domestic electricity demand is constantly rising, which means we need to increase our power-generating capacity,” suggested Dardan Malaj, a communications advisor at the Albanian Ministry of Energy and Industry, in a Revolve Water interview in 2016. “Moreover, foreign investors are mainly interested in the country’s energy sector and Albania really needs those investments.”

Across the Balkans, hydropower projects are being promoted under the logic of ‘green energy’ production, underpinned by large investments from European banks. A 2015  report by industry watchdog BankWatch (pdf link), found that outside investments of hundreds of millions of euro were supporting hydropower constructions across the region. For example, the European Bank for Reconstruction and Development provided €240m to 51 Balkan hydropower projects named in the Bankwatch report, nearly half of which were in protected areas.

“What we have here in the Balkans at the moment is a gold rush on the rivers,” says Ulrich Eichelmann, the director of RiverWatch, told The Guardian in 2015. “I sometimes think the western countries that are financially supporting this degradation process have no idea what they are destroying. There is nothing in Europe remotely like this [the Vjosa] river system.”

There have been a number of prominent political objections hydropower development on the Vjosa. In April 2016, the European Parliament called for stricter controls on the  development of hydropower plants on the Vjosa, recommending that Environmental Impact Assessments should meet EU standards. In May 2016, the vice-president of the European Parliament, Ulrike Lunacek, joined a group of around 100 environmentalists, kayakers and journalists from across Europe to protest against the hydropower constructrions on the Vjosa. In February 2017, the mayors of five areas along the Vjosa valley wrote an open letter (pdf link) to the Albanian Prime Minister, Edi Rama, calling for hydropower developments on the river to be stopped.

However, the issue of hydropower construction on the Vjosa is unlikely to go away anytime soon. Ironically, perhaps, the Vjosa is a prime example of a river system in ‘good ecological status’, as defined by the EU Water Framework Directive. Given that Albania is currently a candidate for accession to European Union membership, should hydropower construction go ahead, then any future EU membership may require the Vjosa’s ecosystem to be subsequently restored, most likely at great expense.

What is clear is that the form and future of the Vjosa river system is inextricably tied to wider political, energy and environmental interests and currents. We’ll keep you updated with what happens next.