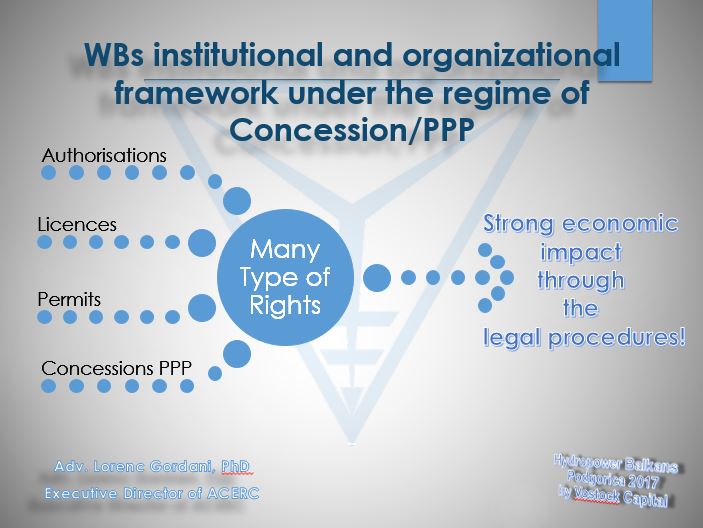 The differences, by the legal prospective, are that the smaller HPP have to follow more accelerate procedures, less burdensome documents but also guarantees! There are mostly granted without competitive procedure, for longer durations, with a more role of local or regional authorities in the decision-making process, etc.

Then taking by example the Albania, the HPP above 2MW are given in PPP and that below or less important technologies (referring to them up to now out of the priority like any size of solar, wind, biomass, etc.) only with authorization.

However, it is important the highlight on an heterogeneous situation: in all the EU Balkans countries, is made use most of permits and in few case licenses, and in the WBs, it is noted that the smaller HPP are given through authorization and the bigger or the most important projects using the PPP.

A lot depends even by the national priority i.e. in Kosovo, are putted in prevalence through the authorisation procedure. The tendering procedure (conducted by the Public Private Partnerships) is used for the construction of new capacity authorised by the Government, if authority of energy issues a written decision that authorisation procedure has not resulted successfully in building of generation capacities to ensure security of supply or accomplishment of objectives related to the use of renewable.

In Macedonia, there are potentially three (3) scenarios for developing large HPPs in the country: 1) by unsolicited proposal, 2) establishing PPP, following the procedures as established by the Law on Public Procurement; and 3) by granting of water concession, following the competitive procedure as outlined in the Law on Concessions and PPPs and the Law on Water (in case of no involvement of public partner).

In Montenegro, two procedures: authorisation up to 1 MW and a public tendering procedure for the rest. In Serbia, a PPP contract is signed as a public procurement contract or a concession granting contract (public contract). The procedure may be initiated by: (i) the Government; (ii) an autonomous province or a municipality; (iii) a public enterprise, if so allowed under a special law; or (iv) an unsolicited proposal of an interested private entity.

However, the above, the Public Private Partnership referred inter alias PPP is putted in place in all the Western Balkans (WBs), first of all due to the budget restriction and limit of expenditure, in accordance with IFI’s. This set of law, have a strong economic impact through the legal procedures!

The PPPs is conceived as a regime build to attract the favour of private and foreigner investors, sharing the risk, through the co-responsibility in the release of permissions and licences, regulating the remuneration base in the international standards, granting the option of international arbitral for resolving the dispute issues. All of this do not exist in the situation regulate with authorisation!

The problem may be that the all is not understand, and in contrary, it is seen (or taken) only the complexity of institutional-organisational framework, in different way from one country to another WB6.