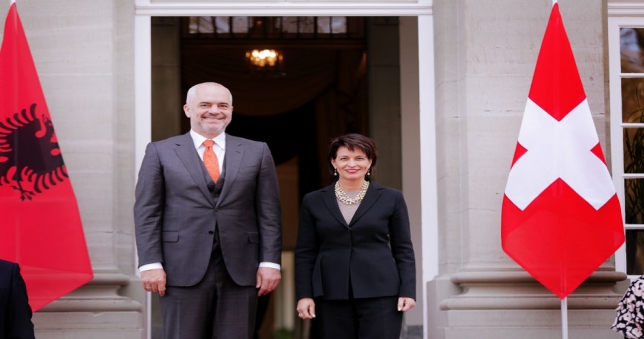 Albania and Switzerland are committed to advance relationships and expand areas of cooperation. This commitment was confirmed today by Prime Minister Edi Rama and President of the Confederation Doris Leuthard at a meeting in Bern, where Prime Minister Rama is on an official visit.

Prime Minister Rama expressed gratitude to President Leuthard for the ever-present contribution that Switzerland has given Albania, and especially for the support given in the past three years, particularly for the successful accomplishment of the administrative and territorial reform. The Prime Minister pointed out that justice reform, starting with the vetting, is strategic and has a multiple importance for the rule of law, economic growth and employment increase.

One of the topic of this meeting was the progress of the bilateral cooperation and its advancement in areas of particular interest for the country such as energy, tourism and vocational education. […]

At the end of the meeting, two cooperation agreements were signed in the presence of Prime Minister Rama and President Leuthard, the agreement in the field of vocational education and the agreement on regional development.

[…] Prime Minister Rama had a meeting also with the President of the National Council, Jürg Stahl.​